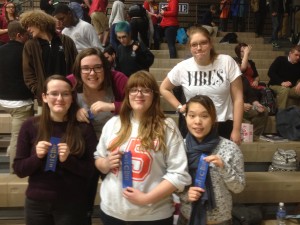 On Tuesday April 21st, Academic Superbowl state qualifications competition was held in Attica. Out of the 6 teams, the science, math, English, and interdisciplinary team are continuing on to state. on May 9th at the Purdue Playhouse. The math and science teams both placed first in the state, while English placed second and interdisciplinary placed third. Mr. Pugh who is both the director of the all of the Academic Superbowl teams and the social studies team coach said that the kids really enjoy the competition.

“It’s a chance for students to show off what they are good at,” Mr. Pugh said.

Mrs. Gates, who coaches the math team said that she gives the students all of the credit.

“I just have really smart kids [on the team] who work really fast,” she said.

She said that one that can be really good at math, but still not good at competing in Academic Superbowl. The kids have to be able to solve problems really fast, in other words, knowledge is important but speed is the deciding factor of the team’s success.

As for the fine arts team there were some technical difficulties that got in the way of a possible successful win.

“The pictures were over exposed and it was really distracting,” said Tinu Lu ’15 who decided to join the fine arts team after taking art history.

However, despite the unclear images, Lu said that it was a lot of fun.

The state competition was held on Sunday, May 10th at the Purdue Loeb Playhouse. Math, Science, and Interdisciplinary all placed first. The English team tied for first, but then lost the tie breaker, putting them in second place.