At just five foot six and 145 pounds, junior Brody Forbes is one of the smallest on the field and may not be very intimidating to the opposing team as he awaits the opening kick off. However, with his ability to score seven points in the first ten seconds of the game, he has proven to be quite a threat on the football field.

Having played since fourth grade, football has become Brody’s favorite sport. He is both the kicker and return man on punts and kickoffs for the Red Devil football team. In the game against Delphi, he ran the opening kick off all the way back for a touchdown and followed by kicking the extra point.

Whether he’s receiving the kick or kicking off to the other team, Brody embraces the high-energy atmosphere. He says rather than getting nervous, he actually stays relaxed and the anticipation doesn’t seem to phase him. He gets focused on the game about 30 minutes before warm-up so he’s always prepared.

Aside from his natural athletic ability, Brody’s great work ethic sets him apart from others. He partly attributes this to his teammate Adam Folta, saying, “I look up to Adam Folta most because he works really hard and realizes hard work pays off.” He says the team is full of role models who work hard and love playing football. He also says “the team has really bonded this year,” because the classes are close and everyone is friends.

Brody even has his own personal fans–known as “Team Brody”, they have made Brody shirts and written “Team Brody” on his car. He says, “It’s kinda cool to know you have your own little support group.”

Besides just playing, Brody loves the fans, Friday nights under the lights, and representing his school and community. 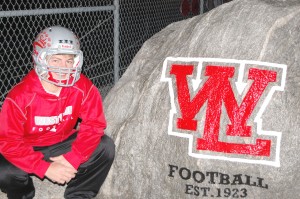