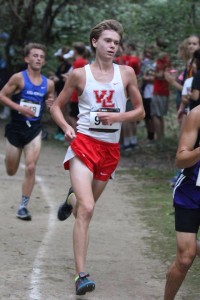 This may be Johnson’s last year of high school, but his days of running have no end in sight. A year after winning state in cross country and getting 41st in the state, Evan Johnson ‘16 hopes to repeat with a changed up varsity lineup that still sees Johnson as the 2nd best runner on varsity.. For Johnson, it has been a long journey to where he is now.

“I started running competitively in the 7th grade, and I was not the best runner,” said Johnson. “I think I was like 7th overall, but I had Coach Polk  and he made it really fun and he made me want to continue cross country, and I actually considered playing soccer freshman year, but I decided against it” said Johnson.

Once Johnson finished 8th grade, things started to look up. “I worked really hard during that summer and that’s when I got faster than my sisters,” said Johnson. “It’s a really big gap in between 8th grade and freshman year and I feel like I got so much better”

Even though he made a lot of progress during the summer, Johnson still lived in the shadows of his sisters, Lauren and Kristen, who both run cross country.

“I thought it was all kind of humorous,” s

The team lost some valuable members last year, yet Johnson remains in high hopes for this year and making it to the podium yet again.

“Yeah it was pretty hard to see some guys go off to college because last year the team had such a strong bond,” said Johnson. “I still keep in touch with them and they even ran with us a few times over the summer.

Johnson has some important decisions to make about where he wants to take his talents.

“I really want to go to college for cross country and I’ve  started looking at some schools.” said Johnson “I don’t care it it’s Division 3, I just want to go to a school with good academics and a good cross country program. And after college, i’m not sure  what I want to do, but I do know I want to keep running”