Film lit is in high demand 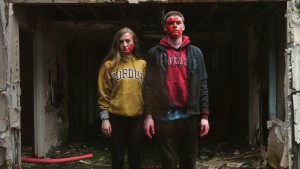 This year, the film literature class is in high demand again. When it’s time to make schedules, tons of students put Film Literature on their list because of what students have told them. And the students that end up taking the class, are rarely disappointed due in large part to the material of the class and the teacher.

“For me, there are two best parts of this class,” said Mr. Shaeffer. “The first is developing those relationships with my students. I think a teacher, above all, has to care about his kids before he can accomplish anything academically. Those relationships are really really important and a lot of them last a lifetime. I still keep in touch with some of my past students.”

In some cases, students can find the class intimidating because they think that they have to be into film to keep up, but that is not the case at all.

“In this class, I really try to solidify all of my student’s needs.” said Shaeffer. “It doesn’t matter if they haven’t seen much cinema, I’ll try to stir their emotions and provide an escape and I think the number one predictor of success is engaging in the material and embracing the notion of film.”

And when it comes to watching clips from films, students get an array of everything. From horror, to comedy, to action, every student’s taste will be satisfied. Even some black and white films are featured.

“I think what makes the class so great is how enthusiastic Mr. Shaeffer is,” said Trevor Paul ‘16. “When you have someone like him teaching you, it makes you want to learn more about films and different aspects of film”

Maybe one of the most difficult things for a teacher of Film Literature is deciding what movies to show to students when you only have one semester to teach them as much as you can.

“Administration has been really great to me,” said Shaeffer “They’ve given me a lot of freedom and it seems that they really trust me. Sometimes I’ll show a clip from a movie that is rated R, but I’ve never had a problem with a student being uncomfortable. In the beginning of the year, I’ll talk to some parents that want to see a list of R-rated films, but there has never been an issue with the films that I show.”

Overall, Film Literature is one of the best classes at West Side. Students shouldn’t be intimidated if they don’t know who Steven Spielberg or Quentin Tarantino are because then this class will broaden student’s horizons a lot and learn about something that is very interesting: Film.

When Do You Start Listening to Christmas Music?