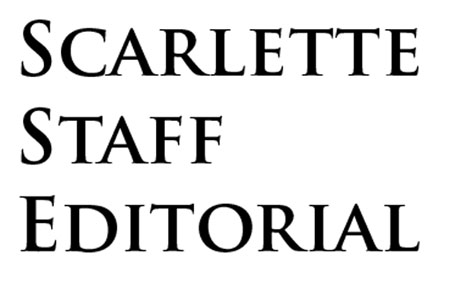 While walking the hallways between class  it’s not uncommon to hear the comment, “West Side’s the best.” , being thrown around, especially in comparison to the surrounding high schools.  Although it is true that academically WLHS is successful, the staff of The Scarlette feels that our bark may be bigger than our bite.

School is for academics, but it is also is a place to socialize and interact with other students; this is wear we feel we lack in skill. Our students are a tight knit group, largely because we have been attending school with each other since we were six years old. The majority of our friends we have known for years, unlike other high schools who meet new people starting freshman year. This factor contributes to our inability to make many new students feel welcome.

We are comfortable with our friends, and with our routines. Because of this, new students are usually found hanging out with other new students. The Scarlette encourages you to branch out from your groups of friends, and introduce yourself to the kids who aren’t used to the West Side atmosphere.

Another contributing factor to our unwelcoming behavior is the lack of socio-economic diversity in the school. A large percentage of the students have grown up in a University Farms-like neighborhood with college-educated parents who are very involved in their kids lives. This makes it difficult to open up to the students at school who don’t live similar lives at home (it’s more than you think). If you’re not convinced of our hesitance towards people being different, here’s an example. If there is a student who becomes pregnant while attending WLHS, odds are they will transfer to Jeff or Harrison within the coming months.

West Side students aren’t very accepting of people who are different than us; it makes us uncomfortable. You should strive to open up your eyes and go against the West Side norm.

1. What’s one point you try to convey to your students all year long about being successful? Monsieur Olhault says... “The number one thing about...
Read more
Events

An Interview With Young Leaders Around The State  In a Zoom call on Saturday, January 23rd, I was honored to interview some of the coreteam...
Read more
Load more