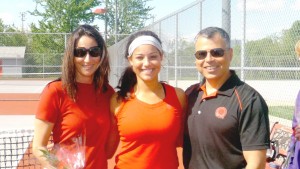 Wylie is involved in numerous clubs including Student Council (of which she was class president her Sophomore year), WeSSO, VISTA (vice president this year), SADD, yearbook, National Honors Society, and French Club. “I’ve met a lot of my friends in clubs, especially a lot of the upperclassmen when I was younger,” she said.

Playing volleyball from her freshman to junior year, softball her freshman year and tennis her sophomore through senior year, Wiley is a well rounded athlete.

Her favorite sport that she’s played in high school is tennis. “There isn’t as big of a divide between the varsity and JV players,” she said, explaining the differences between softball and tennis. “Your success is based on how much you work in tennis.”

In her free time Wylie enjoys hanging out with friends, going to Echo Karaoke, going to athletic games, and attending concerts.

This fall, Wylie will be leaving the state of Indiana to attend the University of Texas in Austin and is majoring in environmental engineering. “What got me interested in it was Mrs. Smyser’s ecology class,” she explained. “ I got really into bioremediation, water treatment, and sustainable development.” She is not really sure which direction she will go in her major, but says that she thinks that she will work a lot with water treatment and public health and sanitation after college.

When asked about goals for her career, Wylie lights up. “Being an engineer, what you’re doing is changing the world,” she said. She finds it very important to take care of the earth for future generations, saying, “I don’t want to move to Mars any time soon, so it would be good to keep the planet that we’re on.”

The future college freshman believes that this school has prepared her well for the future. “[West Side] has made me work really hard. Nothing here is easy,” she explained. There are some things that West Siders are protected from, she admitted, “We’re in this little microcosm of safety where you can leave your backpack on the floor and no one’s going to steal anything.”

What will the senior miss about West Side? “I definitely think that everyone’s really close, especially in my class. I know that’s going to be really different when I go to college,” she said. “There’s not going to be the sense of closeness and camaraderie that we have here.”