Declaring a Statewide Climate Emergency: Youth Voices Will Be Heard

“What makes our movement, ‘Confront the Climate Crisis,’ so powerful,” says youth climate activist from West Lafayette, Annabel Prokopy, “is that we are not only young people who are crazy passionate about change — real, meaningful, and crucial change — but we are young people who are working together.” 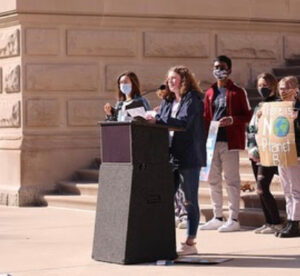 Many of Indiana’s youth such as Annabel took to the podium Friday, March 19, on the southside steps of the Indianapolis Statehouse, urging the state to declare a climate emergency. This climate emergency declaration would mean that the state of Indiana acknowledges that climate change is a public health threat and national security threat. It means our state legislature announces their recognition of the severity of the climate crisis, and puts it on record that they will advocate for sustainable legislative actions, as well as take emergency action before it’s too late. Actions include enacting climate conscious policies and applying steps to achieve climate target goals. If declared, Indiana would become the first state in the U.S. to proclaim a climate emergency- a monumental leap for climate justice.

The students of the Confront the Climate Crisis Campaign composed a letter to Indiana Governor Eric Holcomb, which they hand delivered to the statehouse. This letter demanded an immediate climate action plan and the declaration of a climate emergency for the state of Indiana, meaning Indiana will join 1,864 jurisdictions worldwide. 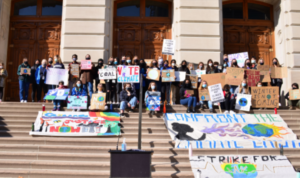 In-person crowd size estimates for the strike were approximately 75 attendees, while 50 more tuned in from home through online broadcast. Members of the Confront the Climate Crisis Campaign showed their support by making signs, chanting, and sharing their words. A prominent theme within these speeches was the questioning of our legislator’s values, as well as what is of the utmost importance to them. “For too many legislatures, the money of their corporate donors from the fossil fuel 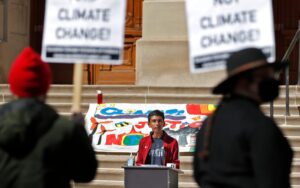 industry matters more to them than the lives of their constituents. That is why we are constantly seeing bills passed that bail out the fossil fuels industry and put Hoosiers’ lives at risk,” says freshman from West Lafayette High School, Rahul Durai, “We are here to give our legislators an ultimatum. They must choose between the people of Indiana and their corporate money.”

The speeches touched on not only the severity of the climate crisis environmentally, but the impacts on minority groups in Indiana. Angel Akinleye, a senior from Riverside High School stressed the relevance of environmental racism in her speech by stating, “In Indiana, black people, immigrants, and low-income communities face disproportionate burdens of environmental pollution relating to health risks. 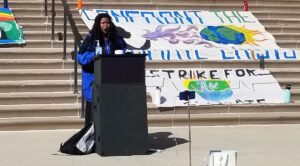 This inequity is the result of a history of segregation, red-lining, discriminating, zoning, gerrymandering, and voter suppression.” Angel added,  “About 1 of 5 of every Marion county resident lives in a food desert. This is around 200,000 people. My school is located in a food desert. A zip code should not determine if someone can access healthy foods. It should not determine whether someone can breathe clean air or drink clean water.”

The students demand that Governor Holcomb read their letter, declare a statewide climate emergency, and schedule a meeting with them before April 22, Earth Day. As of now, the team hasn’t heard any news regarding the meeting, but plan to follow up with a call and email by mid-April. Confront the Climate Crisis Campaign is hosting a “Climate Fair” at the end of the month in celebration of Earth Day, featuring different organizations with interactive booths, live music, art, and many more activities. More information on this event is to come, but speakers will discuss announcements following the meeting with Governor Holcomb. 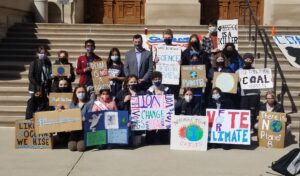 Whatever the outcome may be, the youth of Indiana will not be silenced. The dedication of young activists statewide is becoming harder for officials to simply ignore. Aanchal Agarwal, a junior from Carmel High School, highlighted the importance of unification through educating each other by saying, “The first step into tackling the issue is [tackling] climate denialism. Whether that be from ignorance or strategic avoidance from corporate interests.”

The statewide strike is an example of how focused and intensive local action across Indiana by educating and gaining support can compile together to form a great union. Non-contact lit drops in many different cities such as West Lafayette, Alexandria, Indianapolis, Gary, and Carmel garnered supporters and spread awareness. Aanchal went on to emphasise the 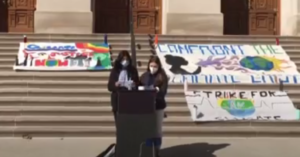 victories of city climate emergency declarations and the impact they have on a statewide level: “Increasing the number of local climate emergency declarations will tackle the daunting Indiana government piece by piece, such that legislatures will start to look around and realize people are waking up too, and it’s time to confront the climate crisis.”

The passionate youth of Indiana are ready to see significant statewide change. In a closing speech at the March 19 event, Annabel Prokopy left the crowd with this remark: “Too many times I, and many other members of our campaign, have heard that we are ‘inspiring,’ but as soon as we leave the room, it’s back to business as usual. But our campaign is simply not here to inspire empty words and empty promises.” 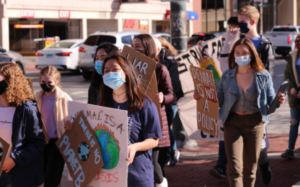 For more information on Confront the Climate Crisis, go to: https://www.confronttheclimatecrisis.com/

1. What’s one point you try to convey to your students all year long about being successful? Monsieur Olhault says... “The number one thing about...
Read more
Events

Student Author, Tiffany Yeung has published her first book, Verge, on amazon. By no small feat, she wrote this book during her senior year,...
Read more
Load more