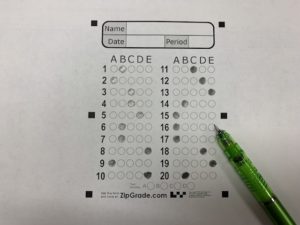 Scantron has long been the go-to system for grading multiple-choice exams at West Side due to its convenience over other systems. Teachers can quickly grade hundreds of tests simply by bringing completed bubble sheets to the school’s Scantron machine. But over the last few years, the Scantron machine has been showing signs of age: teachers have been reporting issues with the machine improperly scoring on an increasingly regular basis. Once a reliable and easy method for grading exams, Scantron is quickly becoming an outdated piece of technology that can no longer be relied on.

In response, teachers have begun using a Scantron alternative called ZipGrade. Instead of a bulky machine, ZipGrade uses an app to grade exams with a cell phone camera. Many teachers have switched over to ZipGrade, with varying levels of satisfaction.

“I like Scantron more,” Mr. Pugh says. “ZipGrade doesn’t mark [wrong answers] on the answer sheet…it seems to take a lot longer to go over a test because of that.” Despite this, however, Mr. Pugh likes ZipGrade. “I was prepared to hate it. And it’s not the debacle I thought it would be.”

Although Mrs. Mills recognizes ZipGrade’s benefits and understands keeping Scantron around would be costly, she doesn’t like that ZipGrade requires more effort. “I’m hoping another technology comes along and makes it more convenient,” she says.

“I was hesitant to try it at first,” says Mrs. Creech, but after trying it, she was surprised by how easy it was to use. “I love ZipGrade because I don’t have to walk downstairs. I can grade it from anywhere…and it’s cheap!”

Many students prefer Scantron over ZipGrade. “It takes way too long to bubble in my answers,” says Isani Panigrahi, 12. “The Student ID thing [on ZipGrade’s answer sheets] that always gets crossed out is annoying,” says Beck Peters, 11. “The ZipGrade layout is worse and it requires more paper than Scantron,” says Lucy Goode, 12.

The Scantron machine is expensive, and the school has no plans to replace it when it finally gives out. West Side is in need of a good alternative—and ZipGrade seems to be the best one. It looks like, no matter our preferences, ZipGrade is here to stay.

Calling all seniors! If you want your grad pics ta

CALLING ALL SENIORS- if you have not already, send

Dm us your best pictures of what you’ve been doi

Have you been “promposed” to?? Send us your cr

SENIORS...this could be you! Senior ads are now av

ITS HOMECOMING WEEK!! Show us how excited YOU are!

Who's ready for another West Side vs CC game?? Tim

Come and see what all the hype is about...see you

Check out our newsletter and tell us what you thin

ABOUT US
FOLLOW US
© 2020 | The Scarlette: Student Newspaper of West Lafayette High School