Where are the waving flags? 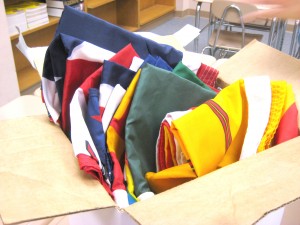 Last year, before the junior high lockers were moved and replaced with the commons area, rows and rows of flags from different countries were displayed on the ceiling. Recently, many students have noticed their absence and were curious if and when they are coming back.

When the flags were added around five years ago, the junior high student council led the project. Each flag represented the country of origin of at least one student in the building. It was a way to show how diverse the school was. It was something that people enjoyed looking at and discussing.

Because there were really no negatives concerning the flags, why they are gone is a mystery. When Mr. Shriner was asked to explain, he said, “We didn’t know what to do with them after the renovation. They were really dirty and some had water damage too. There honestly wasn’t much deep thought put into it.”

The flags were wet and faded because there was a water leak in the ceiling. He also said that because the flags were representing the students five years ago, they probably are not an accurate portrayal of the current student body, given that a whole new group of students are here now.

Currently, the flags reside in multiple boxes inside librarian Mrs. Bentlage’s office. She found them in boxes on the floor this summer, and because she didn’t want them to be thrown away, she took them. “I wanted them to put them back up. They showed all of the diversity in our school.”

She plans to eventually display them throughout the library once a janitor is around to help her out.