Turning the tables: Former students who now work alongside their teachers 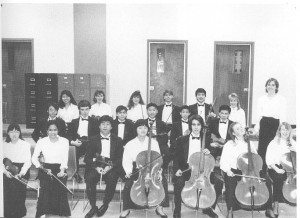 When a high school student thinks of who their colleagues will be in twenty years, they most likely do not think that one day they will be working along side their English AP teacher. But, for some teachers (more than you might think) here at West Side, that is exactly what has happened. Teachers like Ms. Dixon and Mr. Shaeffer work down the hall from the same teachers that taught them so long ago. “It’s sort of surreal,” said Mr. Shaeffer. The now English and Film Lit teacher had Earth Science teacher Mr. Collins back in high school. “I have to remind myself that he [Mr. Collins] is not an authority figure, he’s now a colleague.” Both Mr. Shaeffer and Ms. Dixon agree that calling their former teachers by their first names was odd at first, but now is less difficult to do.

Mrs. Helton has taught hundreds of kids through her career as an English and Etymology teacher, and now three of them work within feet of her. Mr. Leffert, Mr. Ho, and Ms. Dixon all at one time or another sat in the same seats as students today in Mrs. Helton’s classroom.

She says that although she got to know Ms. Dixon the best, she remembers all three students being “excellent.” She knew that they would all go on to do great things, but the fact that three of her students are now teachers at West Side makes her “proud”–they all “deserved the job” they applied for, she says. But Mrs. Helton does question “where all the years have gone” when realizing that she now is working with people she used to teach.

When Ms. Dixon, who was in nine current teachers’ classes, is asked if any of her teachers have changed, she says with a laugh, “They look the same and don’t seem any different.” She also says that although she never planned on returning to West Side as a teenager, she’s happy here and wouldn’t mind staying here forever.

So, current students of West Side, don’t try to rush out of here too fast — you never know when you could be back, for good.

Former students of West Side: